Hi everyone! Today you’ll hear from Jonny Garza Villa, an amazing author who just signed with Claire Draper at the Bent Agency! Jonny’s Twitter pitch made me GASP and insta-follow. Read on to learn about what drew him to write his book and learn more about the books and movies that have shaped Jonny as a writer!

Can you tell me about the book that got you your agent?

JGV: Of course! My book is entitled SUNSHINE AND MOONLIGHT and centers around Julián “Jules” Luna, a closeted teen living in Corpus Christi, Texas whose plans of a low-key senior year are thrown, literally, out the closet when he gets drunk at a party and accidentally comes out as gay over Twitter.

In the months that follow, he’ll figure out what it means to embrace his identity, face a couple shitty repercussions, rely on some phenomenal friends and the best big sister, and maybe fall in love with a boy halfway across the country who slides into his DMs the morning after said party.

Can you tell me a bit about your querying journey? For example, was the project that got you your agent the first book you queried?

JGV: SUNSHINE AND MOONLIGHT is not only the first book I queried but the first manuscript I’ve ever written. I got through the entire first draft during NaNoWriMo 2018 by some sort of divine intervention.

Late April/beginning of May (2019) is when my querying journey began after participating in #DVpit and was lucky enough to get a promising amount of interest. I was getting a lot of full manuscript requests (out of the 16 agents who liked a #DVpit pitch and I ended up querying, 11 asked for a full) but the story just wasn’t connecting in That Perfect Way agents look for. I also got a Revise and Resubmit opportunity a couple months in, which allowed me to work on changing some areas I knew needed jushing up, embraced their advice on the improvements they wanted to see, and took it as a learning opportunity, especially as someone who was (and is) still super new to this.

By late August I still hadn’t found that right agent match, so I decided to try the #PitMad happening first week of September, not really expecting much from it. Thinking it was going to all be very blasé. Exact opposite happened. Had a lot of fantastic names. Ready to get started on Querying 2.0.

Not even a week later, an agent I queried nearly two months before then surprises me with a partial request, and then a full request a day later, and then two days after that I received an offer from them. This is followed by me letting every agent I was currently querying about the offer and to, you know, figure out where our lives are at as hastily as possible.

Fast forward another week and I’m on the phone with Claire Draper (spoiler alert: my current agent) getting my second offer.Honestly, five minutes into our phone call, I was already feeling really good about them, but there was a specific moment in our conversation that had me like, “damn, they really immersed themselves into the story and see what I’m trying to do with it.” Very much a when you know, you know moment.

So, nearly ten months after finishing my first draft, five months of querying, 34 queries sent, and 18 full manuscript requests, here I am, mostly alive, on the other side.

Was there a time in your querying journey when you felt like giving up?

JGV: No, not really. I stayed pretty obsessive about the entire thing, had many friends who were constantly asking me about it and gassing me up, and, I think what was most helpful, I never stopped working on it. Writing and editing and getting CPs really has been a nonstop process, and that’s honestly what I needed if I was going to keep at it. Not something I’d recommend for everyone, though.

How did you get the strength to keep trying?

JGV: Again, friends. Both IRL and within the Twitter writing community. I’m someone who likes to pretend he doesn’t but very much does need validation. And thankfully I have a great group of people who’ve been so supportive and will continually remind me how much they loved my story.

Do you have any advice for querying authors?

JGV: An Excel spreadsheet is GREAT for keeping organized.

What’s something you know now as an agented author that you wish you knew before?

JGV: That it’s not necessarily a me thing when an agent comes back with an I loved this story, but I didn’t love it in the way I’d hoped or in the right way.

It’s great to be excited about a particular agent, so I’m not trying to shit on that, but sending a query thinking “I have to be repped by this specific agent, they’re the only one who will understand me” doesn’t take into consideration the hundred and three reasons why they might not be the best fit. So I wish I knew not to put so much stress on that. Sometimes the person you’d never expect ends up being your Best Fit.

When and why did you start writing?

JGV: I grew up being that kid with a ton of composition notebooks, so I think writing has always sort of been there. But in a more recent context, I started writing after seeing Love, Simon. I went with a few friends who are all queer Latinx, and after the movie I was telling them about Simon Vs which turned into a conversation about how books written about people like us and written by people like us (aka #OwnVoices) weren’t, not necessarily inaccessible, but have never received the same attention. I mean, thinking about YA centering on gay Mexican Americans written by a gay Mexican American, we have, what? Aristotle and Dante, and that’s about it?

I left that night thinking, “you know what, I could do something about this.”

JGV: I’m motivated by all the things I wasn’t and couldn’t be in high school. I grew up in a conservative small town and went to a primarily white Catholic high school. Who I am as a Mexican American and Latinx wasn’t something I connected with or embraced. And who I am as a queer person definitely wasn’t an identity I was trying to outwardly express. So, I guess I’m inspired by lost time. And by queer brown boys who feel like they have to tone down any part of themselves for the world.

Are you a plotter or a pantser?

JGV: Puro Pantser. But I am trying to get into the habit of making Beat Sheets for my next projects.

Who would your dream co-author be?

JGV: Adam Silvera. I would honestly probably cry. He’s perfected this contemporary-speculative, the world is normal except for This One Thing, very almost Black Mirror-esque genre that I am a huge admirer of. Alexandra Villasante’s The Grief Keeper is also a great example.

I’m super interested in writing a story within that genre one day and have it also be very Latinx and very queer, and if that also involved writing with Adam, like, it would be a top three moment in my life.

What’s a book you’ve read lately that you’re OBSESSED with?

JGV: Patron Saints of Nothing by Randy Ribay. One, the cover is #goals. Two, he starts flooring it like, thirty pages in and just does. not. stop. Three, I love a great book that inspires an activist spirit.

JGV: I’m honestly the worst when it comes to movie adaptations. Like, I hate 99% of them, but we don’t have the time for that rant right now.

I’d love to see SUNSHINE AND MOONLIGHT as maybe a limited series. Something that provides the time to allow the whole story to be told and even maybe get an opportunity to expand on it. I’d also love for Tanya Saracho to be the EP/Showrunner. She does all that and is the creator of the show Vida, which I think is a brilliant example of queer Latinx television.

What’s the hardest part about being a writer?

JGV: I’m one of those horrible people who expects myself to be perfect at things from the get-go, and that’s not at all what writing is. So letting myself be horrible and saying “I can come back to this, I can make it better later, it will get better” instead of giving up when things get difficult has been an ongoing effort.

JGV: When you get one of those CP/Beta comments that makes you laugh uncontrollably for like, actual minutes.

I LOVED your book’s pitch. Do you have any advice for authors who want to participate in pitch contests?

JGV: Thank you so much! I would say to look out for any opportunities to practice or get input before the day of the contest. DVpit puts on a #preDV beforehand, and taking part in that is truly why my pitches were in any way successful. I had four or five fantastic people literally help me craft and hone my pitches in the comments of my practice pitches. And look out for people volunteering to take a look at your pitches via DM, etc.

In short, don’t be afraid to reach out.

Can I include your pitch in this blog post?

SIMON VS x ONE DAY AT A TIME

Julián Luna’s Twitter crush slid into his DMs this morning. They’ve clicked instantly & he’s been so helpful dealing with the anxiety of coming out.

What other books/TV shows/movies would fans of your book enjoy?

JGV: Simon Vs the Homo Sapiens Agenda by Becky Albertalli and One Day at a Time (Netflix) are the comps I use. But I’d also say Aristotle and Dante Discover the Secrets of the Universe by Benjamin Alire Sáenz and Vida on SHOWTIME for the Latinx and Mexican American themes, I Wish You All the Best by Mason Deaver for the sibling dynamics, and On My Block on Netflix for the friendship dynamics. Also, Ruby from OMB was the original character inspo for Jules.

Do you prefer drafting or revising?

JGV: Revising. I love those ah-ha moments that come from the fourth and fifth read through, getting other people’s constructive input, and how my perspective on my manuscript gradually becomes clearer as to what it should be and then chiseling away or maybe doing a little caulking until it’s exactly what I’ve imagined it as all along.

When your readers finish your book, how do you hope they’ll react?

JGV: I hope that those readers who fit into Jules’ shoes through his identities, especially queer, gay Mexican American teens, will feel seen, valid, and know that they are enough. I hope it reaches anyone who needs it. And I hope that anyone who doesn’t necessarily relate to Jules will at least come out of it with empathy. Knowing that not every coming out story has Jennifer Garner telling her kid it’s okay, you can breathe. That coming out is not some fad that is no longer relevant to society. That to be openly gay is to forego our safety for the sake of happiness. And to fucking love your friends.

Jonny, thank you for your time!! 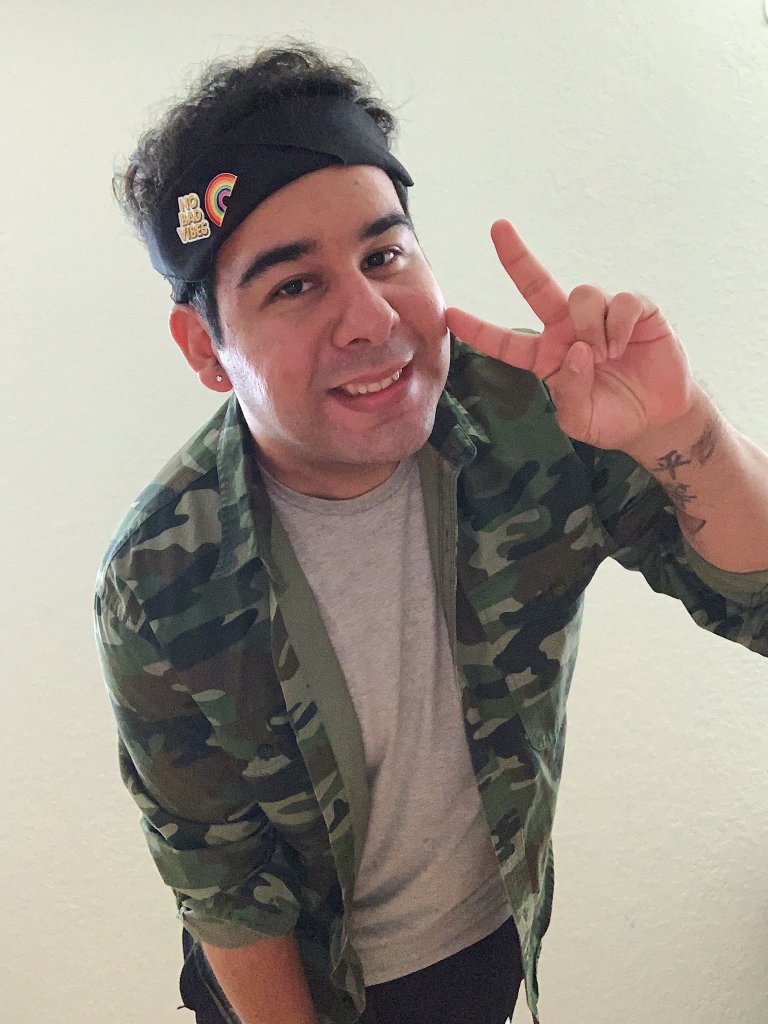 Jonny Garza Villa is a product of the Great State of Texas, born and raised on and around the Gulf Coast. He is a decade-long resident of San Antonio, home of the best breakfast tacos. He is a Sagittarius Sun, a Selena Quintanilla and Frida Kahlo stan, and a hot Cheetos and cheese aficionado. He is a writer of #OwnVoices contemporary YA, bringing his Mexican American and queer identites together into his storytelling. Jonny is represented by Claire Draper with the Bent Agency.

View all posts by catherinebakewell