Today’s author interview is with a dear friend of mine, and author of a book I devoured in less than a day. It’s the 2021 debut DOWN COMES THE NIGHT, a YA Gothic fantasy with healers, kisses, an innovative magic system, and a snowy inn with only one bed available to our heroes…

Please welcome Allison Saft to the blog! Read on to learn about her query journey, what inspires her, and her answer to the question “Is YA Fantasy dead?”

Can you tell me what the query process was like for you? Was there a moment in querying where you felt hopeless? What kept you moving forward? Do you have any advice for querying authors?

AS: My query experience wasn’t too terrible! It was over in about 2 months (October-December), but it happened during an especially chaotic period of my life. I’d just moved across the country, was traveling a lot during the holidays and for work, and dealing with an illness in the family. Full manuscript rejections had a way of catching me out. During work meetings. During Christmas Eve dinner. During an oncology appointment. Learn from my mistakes if these kinds of things will sink you: set up a separate email account, or at least turn off push notifications.

Every now and again I thought, “I don’t think this is going to happen for me.” But I never despaired, even in my bitterest moments. Through sheer stubbornness or pride, I believed Down Comes the Night would find its love match. My rejections were largely subjective–and while they identified problems correctly, they often offered analysis that told me they didn’t get what I was going for. My best advice is to pay attention to trends in your rejections. If you read one and just know that they’re wrong, sometimes… they are wrong. Gut check with your friends, of course.

Friends are so important during this vulnerable time–especially friends who understand how to handle you at your worst. I cope with all hardships in life with humor, and having people who could strike the balance between comforting me and roasting me were essential to my survival. Too much positivity is bad for my health.

What draws you to the gothic? Why did you choose to write a gothic YA story?

AS: I’m drawn to the Gothic partly on an aesthetic level. Who doesn’t love elaborate outfits and flickering candlelight? But mostly, I just think it’s so much fun. Atmospherically, it is so at home being campy–sometimes even melodramatic and absurd. But beyond that, a good Gothic stages an ever-mounting sense of dread. Those suffocatingly contained settings aren’t just decorative; ideally, they force the protagonist to brush up against a Truth Too Horrible to Fathom. I love to watch how characters handle that.

I’m really fascinated to see YA Gothic having its moment in the sun. When I think about the Victorian Gothic, I think about a time of immense social and technological change. 19th century Gothic protagonists seem to be haunted by what refuses to be left behind. Tormented by the collision of old and new forms (especially economic ones, if all the decrepit, insolvent estates & scheming, broke knights are any indication). I wonder what it is about 2019 that’s drawing us to the Gothic aesthetic again.

Funny enough, I didn’t exactly set out to write a Gothic story. I wanted to write a romance based on my favorite Naruto crackship, which required me to orchestrate a plot about two kids on the opposite sides of a war learning to love and forgive each other. So I had this book about… two people stuck in an isolated estate in the mountains, which is plagued by a series of Mysterious Deaths and run by a moody, eccentric proprietor who entraps and torments the heroine. Once I realized what I’d wrought, it was a matter of leaning into the tropes more so I could more deliberately play with them.

How do you feel about tropes? Do you have any thoughts/advice/strategies on how to present tropes in a new way?

AS: I LOVE THEM. Tropes are tropes because people adore them. I think readers have a more or less endless appetite for them, either played straight or subverted. Either way, it’s about considering what promises you’re making when you invoke one. It’s about understanding why they’re mainstays in your genre and how they work.

What happens when your specific characters in your specific setting are faced with the Dread One Bed? Is there delicious romantic tension when played straight? Or do the characters fight to the death to see who gets to sleep in it, either denying or complicating the expected tension?

AS: All of them!!!! I grew up on a steady diet of fanfiction. I’m especially partial to enemies-to-lovers, sunshine/grump, and forced proximity.

The moon. Movement. Folklore. Anime. Small towns and trees and deserts and oceans. A beautifully told story that lives right on the brink of “I want to emulate this” and “I could never come close to this.”

What’s your writing process like? Do you sprint, do you plot, do you make aesthetics, playlists, etc?

AS: To write a book, I need 2 things: a setting and a central relationship dynamic. I think about what kind of premise would play most interestingly against them. From there, I make an extensive scene-by-scene outline in Excel. If I am patient enough, I’ll jot down sensory details about the main characters to help shape their POV: what they notice in the world, what other characters would notice about them.

And then everything is complete and utter chaos. Usually, the first 25% of the book comes out intact (or at least readable). By the 75% mark, it is essentially a screenplay. No matter how much I plan, I must blast my books into the sun and rewrite them multiple times. I have accepted this. Outlines give me a roadmap, but when I see how everything hangs together in a finished draft, I always have to change things based on what I’ve learned about the characters, the world, and the pacing.

I sporadically throw things on Pinterest, between wailing and gnashing of teeth.

Do you have any advice for writers hoping to participate in a mentorship like AMM?

AS: I can’t say enough good things about AMM. Mentorship programs are fantastic opportunities for up-and-coming writers; they give you someone who will challenge you, a community of writers in the same stage of the publishing process, and oftentimes a whisper network.

But I also want to stress that you can get just as much out of a perfect CP match or writer’s group. I always encourage people to apply for programs like AMM, but if you don’t get in, please don’t consider it a measure of your worthiness. The mentee selection process is largely subjective–and depends on your book connecting with the exact right person at the exact right time.

Whether you have a mentor or not, seek feedback from people who understand your work and push you to achieve your vision. As long as you have that, you’ll go far.

If you’ve read any craft books, do you have any that you enjoyed/would recommend? Or some other way for authors to improve their craft?

AS: I have never read a craft book! However, I will always wholeheartedly recommend K.M. Weiland’s blog, especially her series on plotting story and character arcs. She’s a gem and has a real talent for distilling story theory into easily digestible language (with examples!).

However, I don’t think you need to read craft books to improve your writing. I believe you need only to immerse yourself in language–and in imagery. I’ll trot out the classic advice of reading avidly, both within and outside your genre; it’s crucial to develop a sense of where you fall relative to the nebulous benchmark of “publishable prose.”

But one of my favorite things to recommend is to keep an observation journal. An ideally pocket-sized notebook that’s always accessible, so you can record things that strike you as you go about your day. An overheard conversation in the coffee shop. The exact way embers blister a firelog. The way the sunlight strikes your friend’s eyes. Noticing things–and capturing them in a way that is off-the-cuff and visceral–helps hone a sense of imagery and point of view.

Some people whisper about YA Fantasy being dead–and I know this worries some writers. Do you have any thoughts/advice on this front, especially for those people writing YA Fantasy right now?

AS: This is such a great question–and a complicated one to answer! Yes, the market is glutted, agents are becoming more selective, etc., etc. However!!! I am extremely skeptical of anyone who claims an entire genre is dead or dying, especially now, at a moment we’re seeing a push for stories from marginalized people.

To offer some practical advice, there are a few strategies to employ when writing fantasy that feels “fresh:”

I also think there’s a lot of room to push the boundaries of fantasy through genre-blending. Fantasy horror? Fantasy rom-com? Fantasy cozy mystery? Yes please!!! It’s all about mixing tropes from different genres to give them new meaning.

If you are writing fantasy, keep on. It’s definitely tough out there, but the doors will never truly be closed to you.

Thank you so much for your time, Allison!

I highly recommend you follow Allison on social media, here:

And don’t forget to add DOWN COMES THE NIGHT on Goodreads!!:  https://www.goodreads.com/book/show/46189814-down-comes-the-night 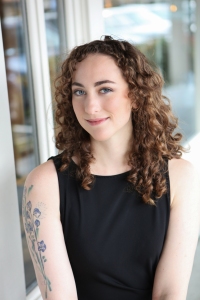 Allison Saft was born in a Philadelphia blizzard and has been chasing the sun ever since. After receiving her MA in English Literature from Tulane University, she moved from the Gulf Coast to the West Coast, where she spends her time hiking the redwoods and practicing aerial silks. She plans to someday run away and join the circus. Allison is represented by Claire Friedman and Jessica Mileo at InkWell Management. Down Comes the Night (Wednesday Books, 2021) is her first novel.

View all posts by catherinebakewell